The Executive Committee of Finte O’Broin have decided after careful consideration and consultation, to dispense with the term “Order” and any relevant language thereof in relation to the clan society’s merit award.

As and from Thursday the 8th of October 2015, the award will be known as The Raven Medal of Merit.

The reason behind the change is based on the fact that Orders were never part of the ancient Brehon system in Ireland. The rational behind creating an award of merit in the first place was merely to recognise the activities of those who have brought honour and dignity to the Byrne name and was never intended to bestow bogus titles or otherwise on its recipients.

Finte O’Broin is an autonomous organisation with over 300 registered member families world wide. We are not members of Clans of Ireland, however, the organisation was officially recognised by Wicklow County Council in 2013 through a grant which contributed to our Gathering event at Ballinacor, in County Wicklow in July of that year. This event was also attended by the Lord Mayor of Wicklow.

Finte O’Broin remains one of the most active clan societies in Ireland raising an average of 10,000 euro a year for charity and contributing to a number of history societies including the Emmet and Devlin Society and the Napoleon Society of Ireland.

For further clarification or information please feel free to contact me at derek@clanbyrne.com

Today the National Statistics office announced that the Byrne name was the 3rd largest surname in Ireland.

The top three are;

It appears we are a prolific lot!! 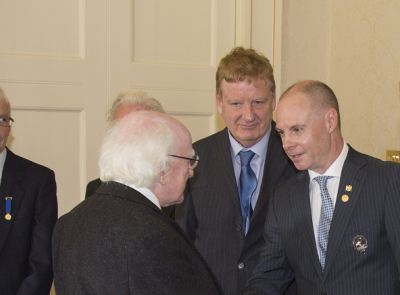 On Thursday the 28th of May, Derek Byrne, The O’Byrne of Downes, was presented to President Michael D. Higgins at the Aras in Phoenix Park as part of a delegation from Clans of Ireland.

The President met with the delegation as Patron of Clans of Ireland to celebrate 25 years since the forming of the organisation.

On behalf of our Patron and Chief Lt.Col. Charles Artaud Byrne and our Executive Committee, may I wish a very Happy Saint Patrick’s Day to all our clan members at home and around the world.

Today we all feel very proud of our shared Irish heritage as we turn the globe green and bring the good will and humour of the Irish people to everyone we come in contact with.

For those of you who are away from home and your family, we hope that you feel the warmth of Ireland in your heart as we celebrate our national day.

May the luck of the Irish be with you all, may the road rise up to meet you and may you be in heaven half an hour before the devil knows you’re dead!

On behalf of our Patron, Lt. Col. Charles Artaud Byrne and all at Finte O’Broin, I  would like to wish our clan members at home and over seas a happy and prosperous New Year and every success in 2015.

Finte O’Broin continues to grow with now 241 registered families in Ireland and across the world. It appears that Christmas and New Year are important times for those wishing to connect with their heritage as we always have a surge of interest and traffic to the website at this time.

We are delighted to be able to act as a focal point for Byrnes throughout the world and to  provide a connection to the rich Byrne history and identity. All enquiries are answered personally by the team at Finte O’Broin and we have made many friends over the years from all parts of the world.

Neither time nor place can ever deminish the connection we feel for one another and for our great name.

With all good wishes,

The 2014 Robert Emmet Memorial event will take place at 2pm on Saturday the 20th of September at St. Catherine’s Church on Thomas Street in Dublin 8.

There will be a lecture by Cllr. Mary Hanafin and all are welcome to this free event which also remembers all those who fought alongside Robert Emmet in the 1803 Rebellion.

Each year I remember my ancestor James Byrne who is commemorated on a plaque on the wall of St. Catherine’s church with others who gave their life alongside Robert Emmet in the ill-fated rebellion of 1803.

Each year, Frank Connolly of the Emmet and Devlin Society organises a fantastic event and interesting lecture for enthusiasts of Irish history. We hope to see members of Finte O’Broin at this important event in our calander.

On behalf of our Patron Lt. Col. Charles Artaud Byrne and all at Finte O’Broin, I would like to wish Terry Byrne and his family, the Byrne Clann of Essex County, Ontario, Canada the very best of luck as they celebrate the 200th anniversary of the birth of their ancestor Michael Byrne of Castlebar in Co. Mayo.

Michael is Terry’s great, great, grandfather who left his home in Mayo during the famine years.

It is wonderful to see that the Byrnes of Essex County maintain their Irisih identity and rich history with such pride and we are sure that their family celebrations today will help to pass that history on to future generations.

With all our good wishes,

At a recent meeting of Clan Byrne it was reported that a further 3,000 euro was raised in aid of MS Ireland by members of the Byrne family of Cloncurry and Kilcock.

Mr. Edward Byrne Jnr. organised two charitable walks over the May bank holiday weekend in 2012 and 2013 which raised over 26,000 euro for MS Ireland, the clan’s chosen charitable cause.

This year, a smaller event was held in Dublin and raised just over 3,000 euro brining the total amount raised by the family to almost 30,000 euro in three years.

Finte O’Broin see this kind of work as being important for all clan societies to make them relevent in a modern world. It is also a great way of organising clan events and getting members of clan societies to work together for a common goal.

Mr. Edward Byrne Jnr. was presented with the the clan society’s highest honour, the Merit Order of the Raven in May 2012 for his work in raising funds for various charitable causes and in particular MS Ireland.

Today marks the anniversary of the capture and execution of Feagh Mac Hugh O’Byrne at Ballinacor in Wicklow on the 8th of May 1597.

Clan O’Byrne of Downes, Cloncurry and Kilcock also welcomed a new addiction to the family on this historic date with the birth of a grandson for Edward Byrne Jnr.

Lewis (Louis), Edward Byrne-Coakley was born on the morning of Thursday the 8th of May 2014 connecting him directly with his famous ancestor.

No doubt, the proud grandfather will take great joy in passing on stories of Feagh Mach Hugh O’Byrne and other Byrne ancestors to young Lewis as he grows up.

A very happy Saint Patrick’s Day to one and all from all at Finte O’Broin.