We are delighted to announce that we have been invited to meet with meet with Dr. Rafe Blaufarb, Co-chair of the International Napoleonic Society, to discuss working on a joint project about Myles Byrne who was a high ranking officer in Napoleon’s Irish Guard.

President of Finte O’Broin, Derek Byrne, has arranged to meet Dr. Blaufarb in London in September to examine how Finte O’Broin and The International Napoleonic Society can work together. This is a very exciting development for us which we are confident will result in a detailed account of the life of Myles Byrne.

In the mean time, our researcher, Edward Byrne Jnr. is working on collating as much information as possible on Myles Byrne and his family in Ireland before the 1798 Rebellion.

Please keep an eye of our news page for further developments.

Check out www.familytreedna.com for a Sizzling Summer Sale

Campaign to bury the remains of Charles Byrne at sea – details of this project will be released at a later date. 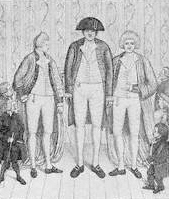 Charles Byrne (1761-83) (drawing by John Kay d. (1826), (courtesy of ookaboo).  An article by K.D. Reynolds in the ‘Dictionary of National Biography’ relates details of the life of the giant, Charles Byrne.  He was born in the village of Littlebridge, Co. Londonderry.  His mother was Scottish.  Charles had at least one brother but was the only member of his family of abnormal size.  He was supposed to measure 8 feet 4 inches on his death but his actual height calculated from his skeletal remains was about 7 feet 7 inches.  He worked as part of a travelling exhibition led by a showman, and was one of a number of Irish giants who used the working name of O’Brien.  Charles was a sensation in London – the Haymarket pantomime of August 1782 being called ‘Harlequin Teague, or, The Giant’s Causeway’, in reference to him.  Charles, who lived in physical pain owing to his condition, was a heavy drinker and died in June 1783 at Cockspur Street shortly after finding that his life-savings of £700 had been stolen.  He had been desperately worried about his remains falling into the hands of anatomists and in order to avoid this he left instructions for his corpse to be buried at sea.  However the anatomist and collector William Hunter bribed the undertaker and Charles’ so called friends with £170 and stole Charles’ body.  Hunter subsequently boiled off the flesh in a giant cauldron and articulated the skeleton for display.  Denied a Christian burial – the remains of Charles Byrne have remained on public view ever since.

On 16th January 2011 BBC 2 broadcast a documentary about Charles Byrne.  As Hunter had boiled down Charles’ remains preparatory to displaying his skeleton most of the bones were deemed useless for DNA testing, but, DNA was successfully extracted from two teeth.  The results showed that Charles had a mutated gene, the cause of a pituitary gland tumour.  The pituitary regulates growth and the tumour was responsible for Charles’ abnormal size.  It is now known that he was suffering from a condition called acromegaly, which can cause great physical pain, and no doubt must have a contributing factor in what must termed as Charles’ self-medication through drinking.  The gene mutation has been traced to five present-day families from counties Derry and Sligo, including that of Brendan Holland who has successfully identified a common ancestor between himself and Charles.  Despite the opportunity to study living DNA of acromegaly sufferers who are related to Charles, the Hunterian still will not contemplate giving the remains of Charles’ a decent burial in accordance with his wishes.

Michael Brennan of Co. Mayo, after watching an Open University programme in the 1980s about the life and fate of the giant, has led a campaign to have the wishes of Charles Byrne respected.  He has contacted the Hunterian, and representatives of the UK and Irish governments but the the museum continues to insist that the remains are of ‘active medical interest’.

Finte O’Broin is already in a position to give Charles a dignified and Christian burial at sea in accordance with his wishes – and will campaing to this end.  John D’Alton in his ‘Illustrations historical and genealogical of King James’ Irish Army List (1689)’ (Dublin, 1860), wrongly assumed that the Leinster O’Byrnes had been dispersed across Ireland and so he incorrectly believed that the Byrnes of Co. Derry (Londonderry) originated with the O’Byrnes of Leinster.  In fact the Burns and Byrnes of this county belong to the Muinter Birn of Co. Tyrone, from which clan descend most of the Byrnes, Burns, and Beirnes of counties Tyrone, Donegal, Sligo, Fermanagh, and Derry.  This grouping is defined as the Northwest Cluster of the Byrne DNA Project.

We are associated with the Byrne DNA project.

War, Politics and the Irish of Leinster, by Emmett O’Byrne.

The Byrne’s and the O’Byrne’s Volumes I and II, by Daniel Byrne- Rothwell.

Welcome To Our News Page

Finte O’Broin aims to preserve the history, culture, traditions and identity of the Byrne name and its variations in Ireland and abroad. We promote research, preservation, intellectual and academic activities associated with the name “Byrne”.