The Raven Medal of Merit 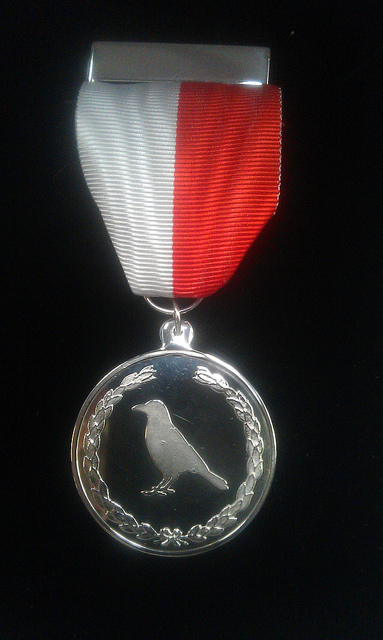 The Raven Medal of Merit is a private Clan award granted to those who bring honour and dignity to the Byrne name. Recipients must be members of a Byrne Clan.

The award was instigated on the 1st of January 2012 by Finte O’Broin and takes its name from King Braen of Leinster who died in 1052. Braen, meaning raven, is the root of the name O’Broin “of Braen”.

The Patron of the merit award is Lt.-Col. Charles Artaud Byrne.

The Keeper of the award is Derek J. Byrne M.Sc. FINS.

The Protector of the award is St. Benedict as legend has it that the saint was saved from death by a raven who swooped down and stole a piece of bread which had been poisoned in an attempt to assassinate him.

The Award Committee is made up of the recipients who are responsible for nominating new recipients each year. A list is sent to the Keeper before the 1st of November and successful recipients are announced via the website on New Year’s Day.

The motto of the award is Crux Sacra Mit Lihi Lux! Nancuam Draco Sit Lihi Dux! (May the holy cross be my light! May the dragon never be my guide!). These lines are inscribed on the cross of St. Benedict.

The award is worn as a military style medal of silver with a raven surrounded by a wreath of olives. On the reverse is engraved “Raven Medal of Merit”. The medal is suspended from a silver bar supporting a red and white ribbon depicting the colours of Clan O’Byrne.

The Patron and the Keeper also wear a medal around the neck depicting the raven on to the front and respectively the word “Patron” and “Keeper” verso.

There are no more than five recipients of the Raven Medal of Merit each year. One of these is a special award granted directly by the Patron to an individual of his choice who has brought honour and dignity to the name through the public arena.

The Order of Wearing

The Raven Medal of Merit should only be worn when the recipient is representing their clan organisation in an official capacity. It may also be worn at formal dress occasions at the wearer’s discretion. It is worn on the left breast.

The ribbon bar is worn when either full decoration or medals is considered inappropriate or impractical.

Decorations of any sort may only be worn with formal style jackets or dresses for women. As white tie is rarely worn in Ireland, black tie is considered formal attire and appropriate for the wearing of all clan decorations.

NOTE: The Raven Medal of Merit is not worn in miniature.

“I think people need a pat on the back sometimes, its a very dingey world otherwise.” Queen Elizabeth II