Byrne/O’Byrne Crests and Coats of Arms 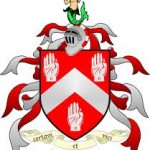 Byrne Crests and Coats of Arms

Heraldry, or the study of family crests and coats of arms, is a fascinating subject and one which is growing in popularity as is the world of genealogical research. For some reason we are fascinated with our family history, who we are and where we came from.

Coats of arms were traditionally a means of identifying which side you were on while in battle. They came into being around the 8th and 9th centuries and are still granted today by the Office of the Chief Herald in Ireland or the College of Arms in the UK.

Nowadays, coats of arms are granted mainly to organisations rather than to individuals but it is still possible to apply for arms, usually at a cost.

The Byrne coats of arms and crests are as ancient as the family itself. Some of our members such as Lt.-Col. Charles Artaud Byrne and Count Henri O’Byrne de St. Gery are what is known as ”Armigerous”, that is, they have been granted their own distinct family crest. For example, Charles’ family coat of arms depicts a coronet between the crest and the coat of arms depicting the family’s royal lineage from Fiach Mac Hugh O’Byrne.

However, the basic form remains the same, three white dexter hands with a white chevron against a red background. Although not strictly allowed to be used by those who have not formally been granted the armiger, the basic form of the Byrne Crest remains a symbol for Byrnes in Ireland and across the globe of family identity and unity and therefore, we applaud it.

It is said that the red sybolised military strength and indeed, the Byrnes have been known for their military might throughout history.

Normally, there are two dexter hands above the chevron which points upwards but this has been seen with one above and the chevron pointing down, as is the case on a church wall in Mainham cemetery in Kildare.

Volume 4 in the series, The Byrnes and The O’Byrnes will consist of a complete history and index of the variations of the Byrne crest and coat of arms. There are also various symbols universal to hereldry which indicate whether someone was the eldest son, second, third and so forth.