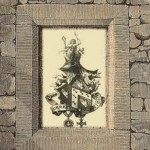 Many Byrnes held high military rank or title in the service of Germany, France, the USA and other countries. Among their numbers were to be found German Barons, French and British aristocrats, Papal Counts and American pioneers and their many houses included a log cabin, an 18th century stately home, a medieval castle and a French chateau.

The current Count of St. Gery residing at Chateaux St. Gery is Henri, the son of Edward and Marie who was born in 1933. The count is said to be very proud of his Irish heritage being descended brom two brances of the clan via the Byrnes of Mullinahack in county Dubulin and the Byrnes of Allardstown in county Louth.

His extensive library at St. Gery contains many family family papers including histories of his family such as “Vies D’Edward O’Byrne 1800-1862 et de Gertrude de Rey de Saint Gery 1806-1866″ which was written by Henri himself and published in 2004.

Henri and his wife Chantal have three children, Anne, Bendict and Edward. By rights he can claim the title Marquis de St. Gery but feels that this would not be appropriate in the modern day Republic de la France.

Baron O’Byrn of Dresden and Saxony

In 1904, Johann O’Byrn was recognised as Baron O’Byrn of Saxony by King George of Dresden. His son Friedrick Eduard Georg O’Byrn, known as Georg, Baron O’Byrn of Dresden, was born on the 10th of August 1864 and died on the 1st of July 1942 aged 77. He is buried at the old Catholic Cemetery in Dresden and his grave is marked by a bronze bust.

In 1884, Georg was appointed an officer cadet in the 2nd Grenadier Regiment no 101 and the Saxon army list for 1914 shows that he had been promoted to Lieutenant Colonel on the 23rd of September 1913. It is evidend that he advanced further in rank during the great war of 1914-1918 as in 1921 he is described as being a retired Major General and a former Chief of Cabinet to the Margraves of Meissen.

Sir Gregory Byrne was the eldest surviving son of Daniel Byrne who was known as “Cromwell’s Tailor” and who had applied for the right to arms confirmed as those granted to his grandfather Pheilim Byrne, a son of Fiach Mac Hugh O’Byrne.

Sir Gregory was said to be a supporter of teh pro-Catholic James II and served under him as tax assessor of the Queen’s County and MP for Ballinakill in the Patriot Parliament.

Please note, this page is currently under reconstruction and will be updated very soon. Should you have any information which you would like to include, please write to derek@clanbyrne.com. Thank you.