Charles was Patron of Finte O’Broin from the establishment of the organisation until his death at the age of 96 in 2020.

Phyllis Burke, CR. Phyllis is the highly acclaimed author of the novels Atomic Candy, Gender Shock and the memoir Family Values: Two Moms and Their Son. Phyllis is also known as a social activist particularly on issues related to the gay and lesbian movement not only in the United States but world wide.

Phyllis was granted Irish citizenship in 2003 and visited her mother’s ancestoral home in Salthill, Galway in the Summer of that year. She currently lives in Los Angeles with her partner Lynn and their son Jesse. Her Godfather, William Joseph Byrne Jr. of  Massachusetts descended from the Byrnes of Co.Wicklow in Ireland. 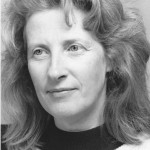 Phyllis was a member of the Executive from the establishment of the organisation in 2011 until 2020.