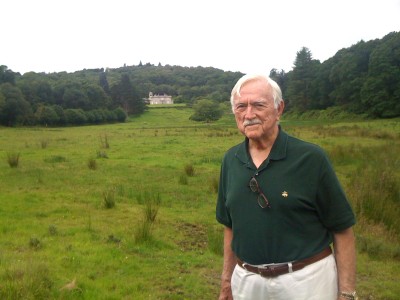 I am delighted to announce the 10th anniversary of Finte O’Broin, the international Society of Byrne clans which was launched on the August Bank Holiday in 2011 in the presence of the Late Lt. Col. Charles Artaud Byrne, descendant of Feagh Mac Hugh O’Byrne who is pictured above on a trip to Ballinacor on the day following the official launch of Finte O’Broin at St. Catherine’s Church, Thomas Street in Dublin 8.

Sadly, Charles passed away in March of 2020 but he was a great Patron and supporter of Finte O’Broin and he returned in 2013 to Ballinacor for our Gathering event and the unveiling of a plaque on the site where Feagh Mac Hugh O’Byrne was captured by the English in the 1585.

Today, Finte O’Broin is one of the most active clan societies in Ireland with regular clan events such as the annual charity walk along the Royal Canal organised by our Head Genealogist, Edward Byrne. To date, this event has raised over 40 thousand euro for charities such as MS Ireland.

Finte O’Broin is at the heart of historic research and development in Ireland through its work with its sister organisation the Napoleon Society of Ireland which hosted the International Napoleonic Congress in Dublin in 2016 and will host it again in Cork in 2022.

In the 10 years that we have been in operation we have registered 398 members from all over the world and as such we provide a focal point for those who want to connect with their family history. We have assisted many in their family research projects and we have representatives at various points around the globe as the Byrnes are indeed, an international family.

Finte O’Broin is also the only clan society which promotes the role of the young in promoting our clan history into the future and recognises the rights of women to hold senior positions within the clan.

Our future projects involve continuing our charity work and promoting the rich history of Clan O’Byrne.

In the meantime, on behalf of our Executive, I would like to thank all those who have joined Finte O’Broin and support us in our work.

Derek Byrne, O’Byrnes of Downes, Guardian of the Name