View all posts by Byrne →

We are delighted to announce the introduction of our new Irish Langauge page ”As Gaeilge” today with the inclusion of a poem from Fiach Mac Aodh’s poem book.

From now on, we will build the content of this page to highlight the beauty and encourage the use of the Irish language.

Merit Order of the Raven – 2014 Nominations

The board of Finte O’Broin and our Patron Lt. Col. Charles Artaud Byrne are pleased to announce that there are two nominations for our private clan order, the Merit Order of the Raven.

The Order is presented to those who have brought dignity and honour to the Byrne name including descendants of the name.

The order was established in 2012 and each year between one and five people are nominated for the award. Names are presented to the Chancellor of the order who in turn presents them to the Patron, Lt. Col. Charles Artaud Byrne.

Nominees are announced on New Years Day on the website and then contacted by our administration team for acceptance. The order, a silver medal worn on the left side of the breast features a raven surrounded by an olive wreath with the words “Merit Order of the Raven” verso.

The insignia is presented at a ceremony during the year and in 2014 will be presented at Ballinacor on Sunday the 11th of May to mark the anniversary of the capture and execution of Feagh mac Hugh O’Byrne in 1598.

Recipients of the Merit Order of the Raven also receive a certificate and may use the designation Companion of the Raven and use the initials CR after their name.

Nicolas C. Burns for his outstanding work and research into volumes of The Byrnes and The O’Byrnes, volume IV of which is due for release in 2014.

Celine Byrne for her contribution to the world of classical music on the international stage.

We congratulate both nominees for their work and for having brought dignity and honour to the Byrne name internationally.

A very Happy New Year to all our members.

Full details about our private clan order can be found on the Finte O’Broin website.

It has become traditional at Christmas to invite our Patron, Lt.Col. Charles Artaud Byrne to publish a Christmas message to all members of our clan wherever they are in the world.

I am an Irish Poet. I cannot help myself.

My soul sings …. and I must listen.

For it sings the song of life.

The song of life? Who wrote that?

Why God did. Who else could?

Why did he give it to you?

He gives it to everyone. Not many seem to know that.

True. But the song is there in every soul.

Wishing all our members and the great family of O’Broin throughout the world a very happy Christmas and a prosperous New Year.

From Charles, Derek and all at Finte O’Broin.

Picture is of Charles with his eldest son Myles at O’Shay’s pub in Dublin in July 2013 while in Ireland for the Gathering of the Byrnes. 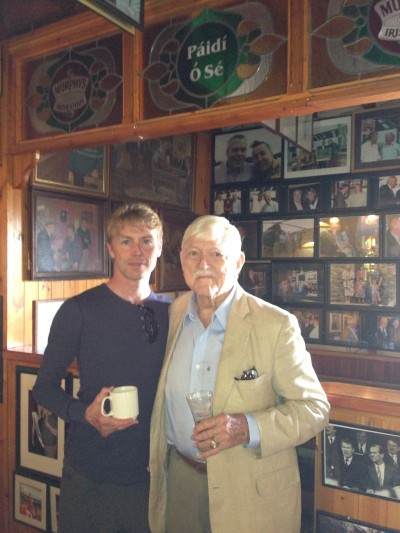 The Board of Finte O’Broin and the Chancellor of the Merit Order of the Raven would like to invite members of the clan society to send nominations to receive the Order in 2014.

Nominations should be based on work or activities which the nominee has carried out to bring honour to the Byrne name. The name and contact details of all nominees along with a 200 word account of why they are being nominated for the honour should be sent directly to me by December 24th at derek@clanbyrne.com

We ask that all nominees be informed of the intention to nominate them.

The Chancellor and Board will decide on between 1 and 5 people to receive the honour in 2014 and details will be posted on the website, as per tradition, on the 1st of January.

We are delighted to announce that we now have 200 hundred registered families and individuals around the world.

Today our 200th member registered with the organisation which in the two years since we began has also raised almost 30,000 euro for charitable causes, has established a Clan Order of Merit, has held a very successful gathering event and unveiled a memorial plaque to Feagh Mac Hugh O’Byrne on the very spot where he was captured and executed.

These are just some of the fantastic achievments of our organisation and we will continue to add to these in the years ahead.

Unlike other clan organisations, membership of Finte O’Broin is free of charge and by virtue of birth right. We do not proclaim fantasy claims to Chieftainships but through a combination of dna and documentary evidence we promote the guardianship of the ancient lineages of our clan so that they may be maintained for generations to come.

For further information on our work and future projects, please visit the website on a regular basis or contact me at derek@clanbyrne.com

For those who would like to see a short film and images of our fantastic gathering event last week at the Ballinacor Estate in Co Wiklow which included a reenactment of the capture and execution of Feagh Mac Hugh O’Byrne, please go to our facebook page “Finte O’Broin Gathering”.

We are glad to announce that our gathering event at Ballinacor on Saturday the 20th of July was a tremendous success with almost 200 people attending for the reenactment of the capture and execution of Feagh Mac Hugh O’Byrne.

The memorial plaque was unveiled by Lt.Col. Charles Artaud Byrne with his eldest son Myles by his side. Myles was also surprised to be one of the  recipients of this year’s Merit Order of the Raven and now becomes our 7th Companion of the Raven.

A big thank you to all who helped to organise this historic event and to all those who turned up on a glorious day to help us celebrate our Byrne history.

We are pleased to announce that our President, Derek Byrne, was interviewed on East Coast Radio on Tuesday the 2nd of July on the subject of the Finte O’Broin Gathering at the Ballinacor Estate near Rathdrum in Wicklow.

By all accounts the interview was very successful and interest in the 20th of July event is mounting.

We would like to thank Wiclow County Council and East Coast Radio for their invaluable support.

Excitement builds for gathering at Ballinacor on July 20th! 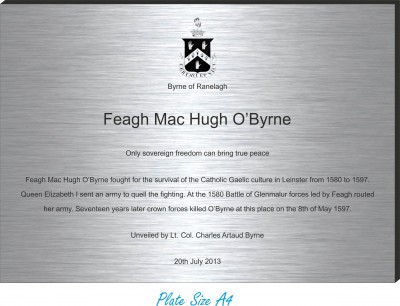 Finte O’Broin will host the official Byrne gathering at the Ballinacor Estate near Rathdrum in County Wicklow on Saturday the 20th of July at 3pm.

There will be a reenactment of the capture and execution of Feagh Mac Hugh O’Byrne by Cliomh, a professional historical and Military reenactment group and an exhibition of medieval costume and weaponry.

The event will also include the 2013 presentation of the Clan Merit Order of the Raven and the unveiling of the plaque above at Fananierin on the Ballinacor Estate, the very spot where Feagh was captured and executed on Sunday the 8th of May 1597.

We are delighted to be joined by Lt. Col. Charles Artaud Byrne and his son Myles and other members of the family.

We are also immensly grateful for the support and enthusiasm of Sir Robert Goff, Lady Davis Goff, Clare Bradley and the staff of Ballinacor Estate. Without their kindness and encouragment this historic event would simply not have been possible.

We hope that you will all join us on the day. Admission is free and gates to the estate open at 2pm.

For further details, please feel free to email me at derek@clanbyrne.com

To the gathering and beyond.

Derek, O’Byrne of Downs, Guardian of the Name.

Rehabilitating Wolfe Tone on the 20th of June

Our sister society, The Napoleon Society of Ireland will host a debate entitled “Rehabilitating the legacy of Wolfe Tone in the run up to 2016″ at the Pearse Street Library in Dublin 2 on Thursday the 20th of June at 6.30pm.

The event is free and marks the 250th anniversary of the birth of Theobold Wolfe Tone, founder of the United Irishmen.

The debate will be chaired by Tommy Graham, Editor of History Ireland and will include presentations from Dr. Sylvie Kleinman, lecturer at TCD and Aengus O’Snodaigh TD of Sinn Fein.

Comment, questions and debate will be invited from the audience following the presentations. All are welcome and we look forward to seeing you on the night.

Should you require further information, you can contact me at derek@clanbyrne.com